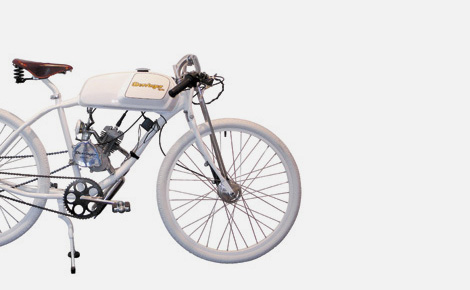 Inspired by 1920’s era board track racing motorcycles, the Derringer is a revolutionary moto-hybrid that can be pedaled as a traditional bicycle, propelled via engine power, or pedaled with the assistance of engine power.

While under power, the pedals can also remain stationary, allowing you to operate in the style of a traditional motorcycle. Capable of fuel economy ratings that can exceed 150 mpg, the Derringer was created by world-renowned industrial designer Adrian Van Anz.

All beings by nature are Buddha, as ice by nature is water. Apart from water there is no ice; apart from beings, no Buddha.