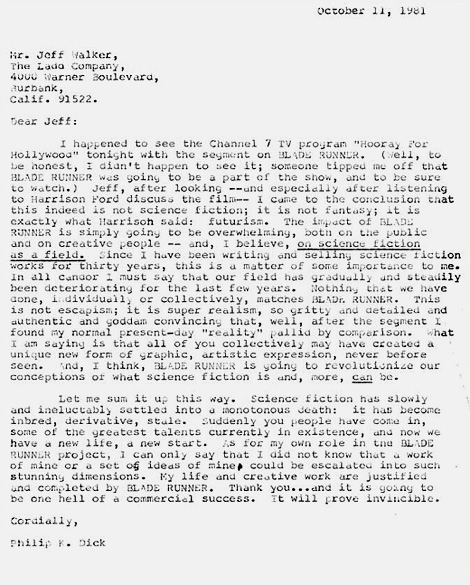 I am a huge, huge fan of the film Blade Runner, considering it one of my favourite movies and certainly my absolute favourite science fiction film, so I was delighted to stumble across this piece of Blade Runner ephemera at Letters of Note via Steve Lee.

Blade Runner was based on the novel Do Androids Dream of Electric Sheep and the book’s author, Philip K. Dick, had been extremely apprehensive of a future adaptation but wrote the above letter to the film’s production company after catching his first glimpse of the movie during a television programme. He passed away just 5 months later, 4 months before the movie was released.

Read on for a full transcript.

I happened to see the Channel 7 TV program “Hooray For Hollywood” tonight with the segment on BLADE RUNNER. (Well, to be honest, I didn’t happen to see it; someone tipped me off that BLADE RUNNER was going to be a part of the show, and to be sure to watch.) Jeff, after looking –and especially after listening to Harrison Ford discuss the film– I came to the conclusion that this indeed is not science fiction; it is not fantasy; it is exactly what Harrison said: futurism. The impact of BLADE RUNNER is simply going to be overwhelming, both on the public and on creative people — and, I believe, on science fiction as a field. Since I have been writing and selling science fiction works for thirty years, this is a matter of some importance to me. In all candor I must say that our field has gradually and steadily been deteriorating for the last few years. Nothing that we have done, individually or collectively, matches BLADE RUNNER. This is not escapism; it is super realism, so gritty and detailed and authentic and goddam convincing that, well, after the segment I found my normal present-day “reality” pallid by comparison. What I am saying is that all of you collectively may have created a unique new form of graphic, artistic expression, never before seen. And, I think, BLADE RUNNER is going to revolutionize our conceptions of what science fiction is and, more, can be.

Let me sum it up this way. Science fiction has slowly and ineluctably settled into a monotonous death: it has become inbred, derivative, stale. Suddenly you people have come in, some of the greatest talents currently in existence, and now we have a new life, a new start. As for my own role in the BLADE RUNNER project, I can only say that I did not know that a work of mine or a set of ideas of mine could be escalated into such stunning dimensions. My life and creative work are justified and completed by BLADE RUNNER. Thank you..and it is going to be one hell of a commercial success. It will prove invincible.