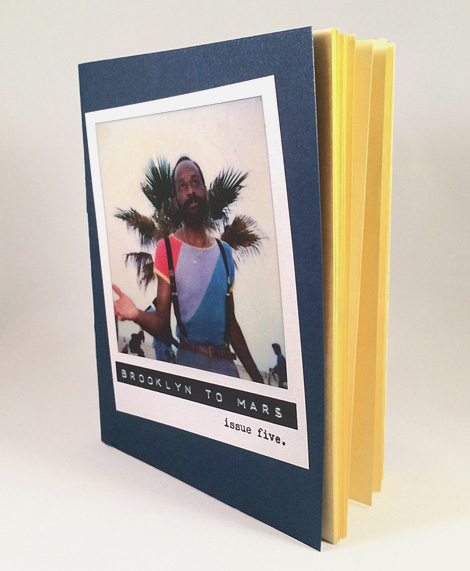 Just recently to have arrived through my letterbox was a little package containing four issues of Brooklyn To Mars, a limited edition, hand-numbered zine published by Markus Almond.

Each issue is typed on a yellow portable Remington typewriter and pages laid out by hand with scissors and a glue stick. Containing mainly inspirational passages on life and the creative processes affecting artists, entrepreneurs and lone wolves, each piece of writing (which Almond calls ‘paraprose’) is given it’s own page and occasionally decorated with a 19th century pictoral image.

Here is the philosophy behind this beautifully produced little zine:

“John Glenn was the first American to orbit the earth. He did this on February 20, 1962. Glenn was able to leave our world on a poorly constructed rocketship. He floated in space and gazed at the earth. This was before computers were realistically usable, before the internet existed, and even before the Beatles released their first album.

If a man is able to leave the earth using primitive technology, think of all the possibilities in your life today.

This is what Brooklyn To Mars seeks to explore. It’s about learning from incredible people and saying, “I can do that.” Brooklyn To Mars is about starting from where you are today and going someplace extraordinary.”

Having just struggled through the first Christmas since the break up of my marriage, reading through Almond’s collected inspirational musings was just the thing I needed right now to help lift my spirits and break on through to a new chapter in my life.

Brooklyn To Mars is available from the Markus Almond Shop.

You will always exist in the universe in one form or another.