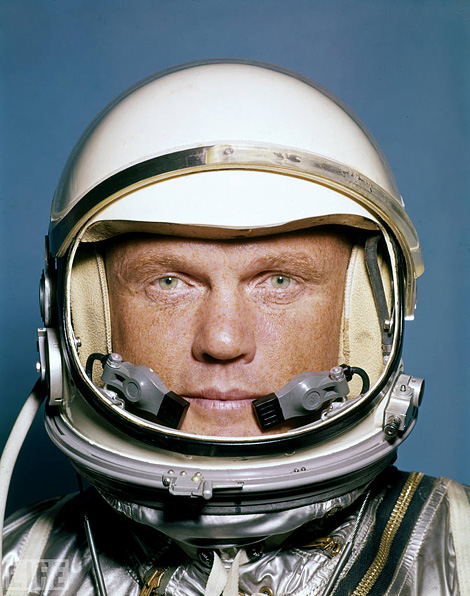 “This straightforward yet riveting portrait of astronaut John Glenn by LIFE’s Ralph Morse—a man who spent so much time chronicling the lives of the original Mercury 7 astronauts that Glenn himself dubbed Morse “the eighth Mercury astronaut”—neatly captures the almost preternatural confidence and clear-eyed sense of purpose that Glenn and his colleagues not only shared, but embodied.”

“It’s easy to forget now, but during the race into space of the late 1950s and early 1960s, America seemed to forever be playing catch-up with the USSR. The Soviets beat the U.S. into space with Sputnik in 1957; in 1961, a cosmonaut named Yuri Gagarin became the first human to travel in outer space. But less than a year after Gagarin’s flight, when 39-year-old Glenn orbited Earth, NASA—and the nation—suddenly found itself with a genuine hero straight out of central casting: a blue-eyed, no-nonsense Marine Corps fighter pilot and Korean War vet (married to his high school sweetheart, no less) who quickly became the face of America’s emerging preeminence in the era-defining Space Race.”

“Morse’s photograph, meanwhile, became the one image that an entire generation of Americans forever associated with John Glenn: a man who was born ready.”

Beauty will result from the form and the correspondence of the whole, with respect to the several parts, of the parts with regard to each other, and of these again to the whole; that the structure may appear an entire and complete body, wherein each member agrees with the other, and all necessary to compose what you intend to form.