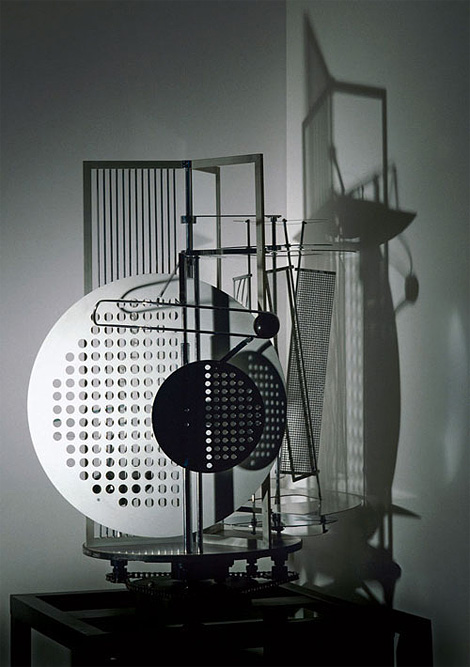 László Moholy-Nagy, pioneering Hungarian designer/photographer/film maker/painter of the Bauhaus movement, designed the Light Space Modulator, to create pools of light and shadow so he could study their movement.

“This piece of lighting equipment is a device used for demonstrating both plays of light and manifestations of movement. The model consists of a cube-like body or box, 120 x 120 cm in size, with a circular opening (stage opening) at its front side. On the back of the panel, mounted around the opening are a number of yellow, green, blue, red, and white-toned electric bulbs (approximately 70 illuminating bulbs of 15 watts each, and 5 headlamps of 100 watts). Located inside the body, parallel to its front side, is a second panel; this panel too, bears a circular opening about which are mounted electric lightbulbs of different colors. In accordance with a predetermined plan, individual bulbs glow at different points. They illuminate a continually moving mechanism built of partly translucent, partly transparent, and partly fretted materials, in order to cause the best possible play of shadow formations on the back wall of the closed box. (When the demonstration occurs in a darkened space, the back wall of the box can be removed and the color and shadow projection shown on a screen of any chosen size behind the box.) The mechanism is supported by a circular platform on which a three-part mechanism is built. The dividing walls are made of transparent cellophane, and a metal wall made of vertical rods. Each of the three sectors of the framework accommodate a different, playful movement study, which individually goes into effect when it appears on the main disc revolving before the stage opening.”