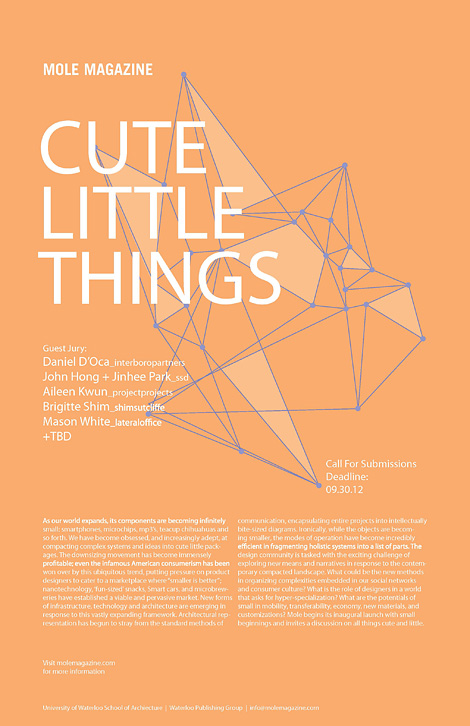 A group of architecture students affiliated with the University of Waterloo School of Architecture are launching a new publication, Mole Magazine. With a jury including Mason White of Lateral Office, Daniel D’Oca of Interboro Partners, Brigitte Shim of Shim – Sutcliffe, and John Hong and Jinhee Park of SsD, the first issue is expected to print January 2013.

The inaugural theme is “Cute Little Things”; As our world expands, its components are becoming infinitely small: smartphones, microchips, mp3’s, teacup chihuahuas and so forth. We have become obsessed, and increasingly adept, at compacting complex systems and ideas into cute little packages. The downsizing movement has become immensely profitable; even the infamous American consumerism has been won over by this ubiquitous trend, putting pressure on product designers to cater to a marketplace where “smaller is better”; nanotechnology, ‘fun-sized’ snacks, Smart cars, and microbreweries have established a viable and pervasive market. New forms of infrastructure, technology and architecture are emerging in response to this vastly expanding framework. Architectural representation has begun to stray from the standard methods of communication, encapsulating entire projects into intellectually bite-sized diagrams.

Ironically, while the objects are becoming smaller, the modes of operation have become incredibly efficient in fragmenting holistic systems into a list of parts. The design community is tasked with the exciting challenge of exploring new means and narratives in response to the contemporary compacted landscape. What could be the new methods in organizing complexities embedded in our social networks and consumer culture? What is the role of designers in a world that asks for hyper-specialization? What are the potentials of small in mobility, transferability, economy, new materials, and customizations? Mole begins its inaugural launch with small beginnings and invites a discussion on all things cute and little.

Naked
on a horse
in pouring rain!