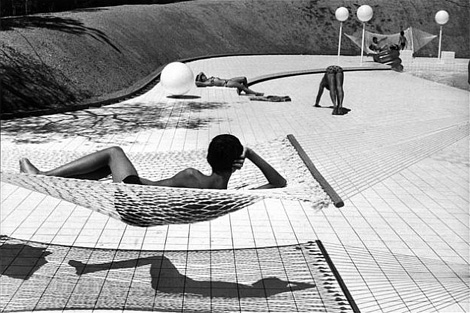 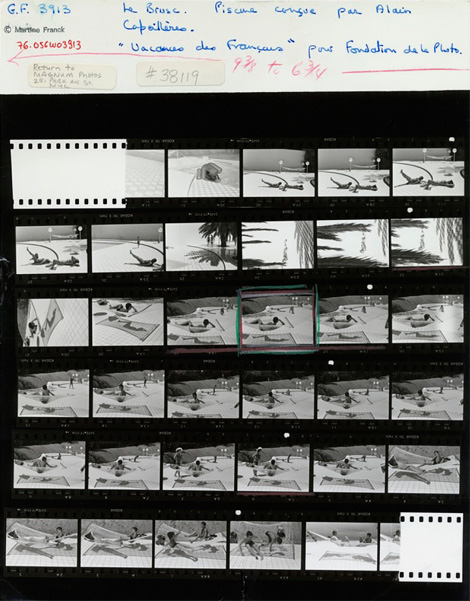 Martine Franck, Magnum photographer and the second wife of the late Henri Cartier-Bresson has died, aged 74.

In Contact Theory, Ms Franck remembers being en scene to take the image shown top and how she chose this particular frame…

“This picture was taken during the summer of 1976. I had just been given a grant by the Fondation Nationale de la Photographie …. to photograph the French on holiday. I was on my way to photograph a pop and rock festival at Le Castellet and decided to stop by and see my friend the architect Alain Capeilleres. I knew that Alain had just completed the swimming pool, he had talked about its conception the previous year and I was really excited to see it. He greeted me by saying that an Italian photographer had just come to take photographs for an architectural review and that I should go down to the pool and have a swim.

I saw a couple of people doing exercises and an empty hammock and and then all of a sudden a young boy got into the hammock, the first thing I noticed was the shadow and I ran. It was all over so quickly. I remember trying to find the best angle and being bothered by a towel on the left of the hammock and a bathing suit on the right, then Alain’s wife Lucie arrived in her sun hat, said hello to the young boy. A few seconds later another boy climbed into the hammock. I changed angles but the picture was gone. I had Tri X in my camera and I distinctly remember being concerned by the glare of the August midday sun on the white tilings. I had closed down to f.16 and was shooting at a 1000th of a second but I still knew I was going to be over exposed, however most important I was convinced I had an image.

The ultimate choice was easy. Frame 18a was discarded because of the towel on the left, the figures in the background were confused and I had framed too close to the shadow of the hammock. Frame 16a was a possibility but I would have had to crop the bathing suit on the right which I preferred not to do and the man doing push ups in the background was in a less interesting position. The image that had the greatest intensity and concision was to my mind frame 17a.”

Lose your mind and come to your senses.