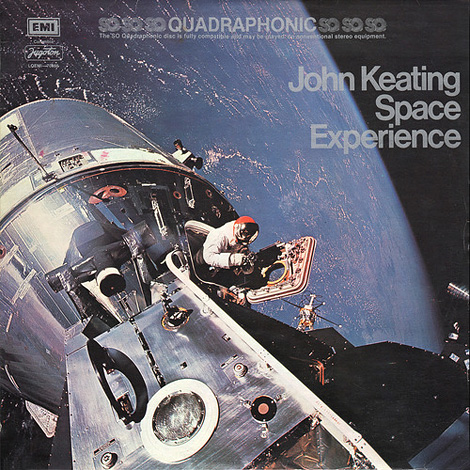 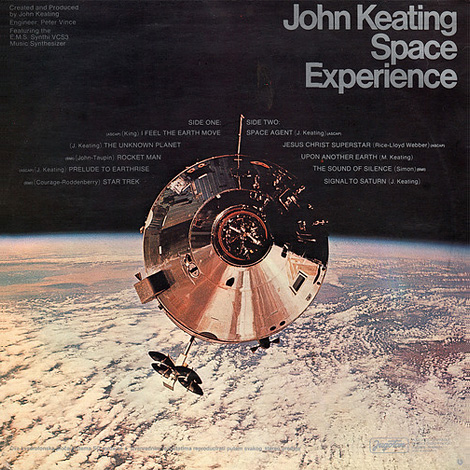 This was one of a series of albums produced in the early seventies by John Keating, featuring original compositions alongside arrangements of popular songs, recorded using emerging synthesiser technology such as the Moog synthesizer and the EMS VCS3.

The records were often used as demonstration discs in the 1970s in Hi-Fi stores because of their quality and I recall we had a copy of this particular record.

Front: Apollo 9 Command/Service Modules (CSM) nicknamed “Gumdrop” and Lunar Module (LM), nicknamed “Spider” are shown docked together as Command Module pilot David R. Scott stands in the open hatch. Astronaut Russell L. Schweickart, Lunar Module pilot, took this photograph of Scott during his EVA as he stood on the porch outside the Lunar Module. Apollo 9 was an Earth orbital mission designed to test docking procedures between the CSM and LM as well as test fly the Lunar Module in the relative safe confines of Earth orbit. Photo: NASA.

Back: The Apollo 9 Command/Service Modules photographed from the Lunar Module, “Spider”, on the fifth day of the Apollo 9 earth-orbital mission. Docking mechanism is visible in nose of the Command Module, “Gumdrop”. Object jutting out from the Service Module aft bulkhead is the high-gain S-Band antenna. Photo: NASA.

Love the pitcher less and the water more.