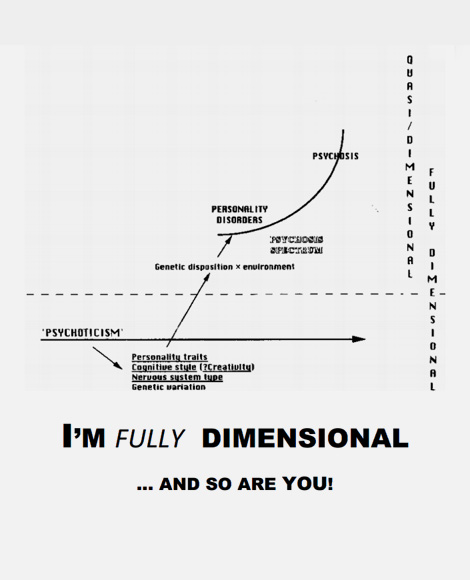 I went up to Oxford to visit my Dad at the weekend and stumbled across this little masterpiece on a mug in his kitchen.

On quizzing him about it he informed me that was a diagram he crafted a few years ago in an attempt to illustrate his view of how psychotic illnesses like schizophrenia and bipolar disorder are based on personality traits that can be adaptive and beneficial,  particularly in their connection to creative thinking.

Apparently it has become iconic amongst students and colleagues of my Dad with an interest in the subject of schizophrenia and schizotypy and eventually ended up being applied to mugs and tshirts by Branden Miller, a student of his who added the caption at the bottom.

“The diagram illustrate two different views about the dimensionality within psychotic illness.

The top half, labelled quasi-dimensional, refers to the medical view which does recognise a spectrum (people can have varying degrees of psychotic symptomatology – what Stephen Fry refers to in his case as ‘bipolar lite’). What is referred to as the ‘fully dimensional’ theory is more radical and one I have peddled over the years. The dimensionality here is about a continuum of personality traits which in themselves are perfectly healthy (even beneficial, relate to creativity etc).

In the last regard compare the quasi model where, even if mild, variations on that spectrum imply some kind of defect and can’t explain connections to psychological excellence like creativity…. The fully dimensional theory incorporates the illness idea by arguing that the psychotic traits, as well as being adaptive, can however predispose to psychotic illness in unfavourable circumstances (c.f. anxiety – perfectly normal trait – and anxiety disorder). So if one is thinking about the diagram as progression along a continuum an individual at the high trait could ‘jump’ into the medical style spectrum.”