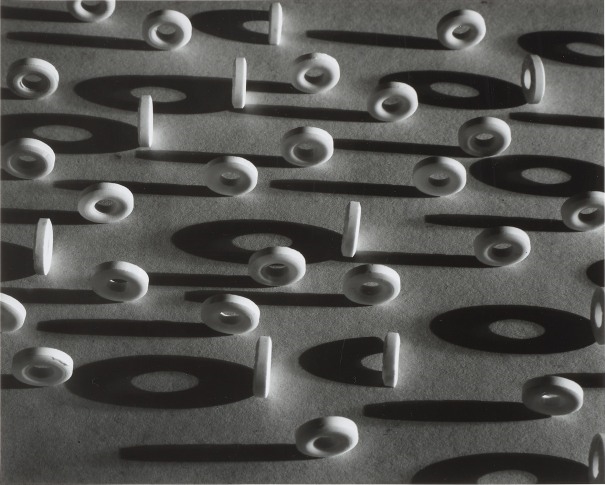 From the sale catalogue for this print:

“Light is my inspiration. My photographic images search for dimensions that words cannot touch—the result of intense responses to personal experiences. I do not wish to “record,” but rather to touch upon the illusive meanings which I perceive and try to comprehend in this limitless universe.” – Ruth Bernhard

Born in Berlin in 1905, Ruth Bernhard left her studies at the Berlin Academy of Art in 1927 to join her father, Lucian, a graphic artist and designer, in New York. Two years later, she began her career as an advertising and illustration photographer, working for architects, designers, and artists, some of whom were friends or associates of her father. A stunning example from 1930, Lifesavers (Lot 123), reveals the dynamic Deco play of light and shade, and her mastery of formal design.

During a trip to California in 1935, a chance meeting with the photographer Edward Weston, who was unknown to her, first inspired Bernhard to pursue photography as an expressive medium and stay in California for the next three years. In 1939 Bernhard moved back to New York in pursuit of work, but found herself returning to California in 1948, and settling in San Francisco in 1953. It was a heady period for photography in that city; the Westons (Edward, her mentor, and his son, Brett), Ansel Adams, Minor White, Dorothea Lange, Don Worth, Larry Colwell, Imogen Cunningham, Wynn Bullock, and several others were all working in the Bay Area and Northern California. With her carefully considered still-life “portraits” of shells, leaves, and everyday found objects and especially her lyrical images of nudes, Bernhard established herself as a key figure in West Coast photography. She was one of the few photographers of the post-World War II era whose work and activity shaped the vision of the artist-photographer—an attitude about the poetics of depiction that matured in the nurturing avant-garde atmosphere of San Francisco after the war. Utilizing subtleties of light and shadow, she transformed the simplest objects into resonant, sensual almost fairytale-like representations, as in Two Leaves of 1952 (Lot 127). By the late 1950’s Bernhard had begun teaching private classes in her studio and giving workshops such as Classic Figure Photography, Problems of Posing and Lighting the Figure, The Art of Feeling, and she became one of the most highly acclaimed teachers of photography.

Bernhard’s meeting with Weston most strongly changed her view about photography and its potential. “It isn’t that I was interested in photographing the way Weston photographed,” she had noted. “That didn’t interest me at all. I enjoyed his philosophy—his attitude—the purity of his seeing. And I understood that this was really what I was trying to do, without being aware of it. That’s why I continued being a photographer. … We shared something—photography was considered universal … it was not a cold, mechanical process.” In 1952, in the iconic Classic Torso (Lot 134), Weston’s pictorial influence was nonetheless fully absorbed and made manifest in her own way.

Of her relationship with the human form, Bernhard said: “I work very hard at organizing. When I work with a model, I am a sculptor. I work to simplify. I want to create power and simplicity. [For instance, as in the 1967, Perspective II, Lot 130.] That’s what’s important to me. And I want to perfect the image.”

Critical opinion has established Bernhard as one of the foremost interpreters of human figure. Her photographs of the female body range from sculptural rendition of the human form to abstractions that recast the body into elegant landscapes, like Sand Dune of 1967 (Lot 118), to multiple images of women and the natural world with which Bernhard felt we are all intimately connected: “It is my aim to transform the complexities of the figure into harmonies of simplified form revealing the innate reality, the life force, the spirit, the inherent symbolism.”

These pictures are not political statements, but reverential and awe-inspiring in intent and effect. What she called “the eternal body” is the body sacred, a communication with the spiritual. For Bernhard, Eros and art were the same. In the nudes, as in all of her works, she believed that she had a relationship with objects—a holy relationship—that enabled them to speak through the language of the eye as it is stimulated by her photographs. In this sense, through the things in her pictures, she communicated the unseen, with the goal being to bridge the seeming emptiness between the material and the invisible. She saw the nude as not exceptional in her work or vision, but as part of the greater whole of what for her was a spiritual realm. “The nude [such as Double Vision of 1973, Lot 136 ] represents to me the same universal innocence, timelessness and purity as do all seed pods, suggesting the mother as well as the child, the parental as well as the descendents, conceived according to nature’s longing.”

One could sense the most intimate glimpse of this wonderfully cheerful and exuberant woman in her comments on teaching and challenge to her students: “Fall in love. Every day. With everything. With life. If you can fall in love, you can be a photographer. I think that is absolutely essential.”

Bernhard remarked that her goal in photography, as revealed perhaps in the image In the Box (Horizontal) of 1962 (Lot 125) was always to express her reverence for the universal order. “As I see it, life and death are two words for the same thing; all components of the living order. To be a creative person is a significant privilege as well as a great responsibility.”

Wearing a turtleneck is like being strangled by a really weak guy, all day