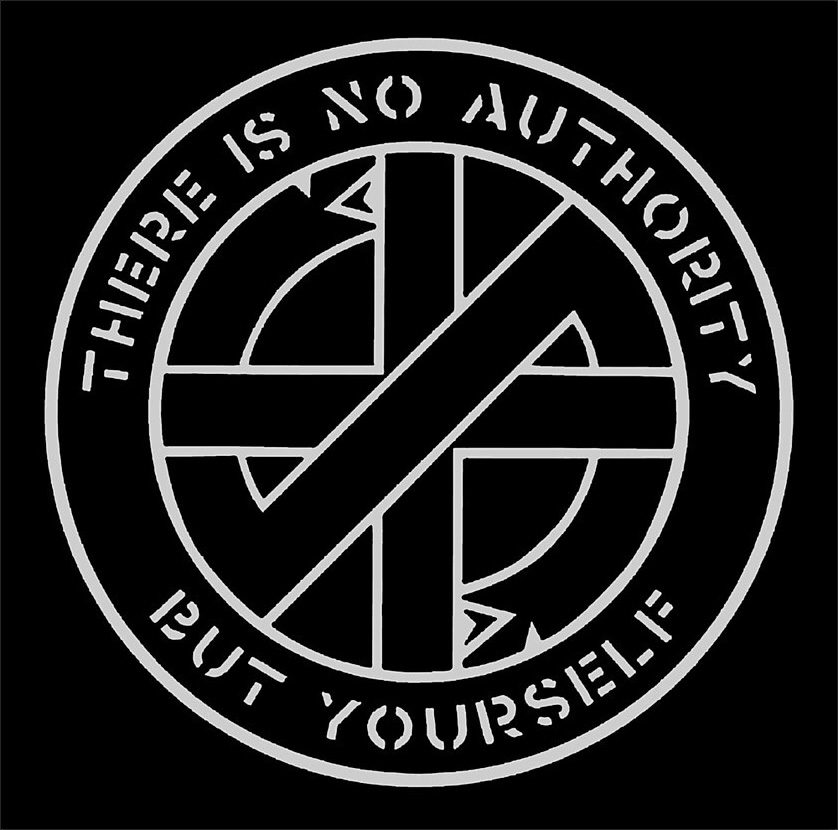 The following extract is from George Bergers book The Story of Crass.

When Pen had finished the book, he asked Dave King to design “a little frontis piece. I’d printed them up on this rough grey paper and it had a militaristic, communistic feel about it. I thought it’d be nice to have a little insignia on it.”

So Dave set to work on a design incorporating the subject matter of the book – family, state, church – all the power structures. As Rimbaud remembers, he started with the Greek symbol, The Star of Life, which features a snaked climbing a pole in the middle of a six pointed star and can be seen today on many British ambulances as a symbol of health. Having gone through a number of different designs, he came up with what would become known worldwide as the Crass symbol. A striking black and white mish-mash of ancient and modern symbols, it could mean most things to most people: try and you might see within it the Christian cross, the Union Jack, the Swastika and two snakes devouring each others’ tails. It looks for all its worth like the sort of symbol you might find in an Egyptian pyramid or an ancient book of spells.

“We were one of the first outside the big boys like Ford, to use a cor- porate logo so effectively,” notes Penny Rimbaud.

Dave King remembers: “He said he wanted something that would crystallize the title. It started out as a Christian Cross with a snake. But a medical symbol? I didn’t think so much of that symbol . . . all these symbols are in the air, they’re archetypes. . .”

King, unlike Rimbaud, remembers the first sketch as a cross with a snake zig-zagging across it. Between the two of them, it mutated and developed through several prototypes into the symbol that decorates the cover of this book, most of their records and many a punk rock jacket.

Given the Christian cross on the Crass symbol, there have been sug- gestions that the snake represents the devil. But Dave King is ambiguous to the idea:“It was a reflection of Pen’s anger at what he felt were these destructive aspects of Christianity. So in that sense the snake was just against . . . it wasn’t really Adam & Eve’s serpent, it was just something in counterpoint.

“There was a book at Dial House of Japanese family crests, and the majority of them were designed in a circle – it’s something that repre- sents the clan and that appears below the neck at the top of a kimono. So the serpent and the cross were conformed into a circle, it just seemed to come to form that way, there were two heads.The third thing that completed the design was the idea that it could be a stencil.The idea of a stencil had been something in the air for a while. It almost pre-dated the idea of a graffiti campaign.There was a guy called Robert Indiana (aka Robert Clark) who did these paintings: he used stencil lettering and a lot of his paintings were circular. He did this image of the word ‘love’ with the letters ‘lo’ above ‘ve’; his work was an influence.Then there was a book that everyone was interested in called Herbert Stencil, he was called a quick change artist. So, for a while I was Herbert Stencil at art school. I’ve always been interested in trying to reduce something to its essentials.To make it as solid as possible – you can’t really break it. It has an irreducible quality to it – the solidity helps create that sense of reson- ance. I had a pretty good idea it was a strong piece.
“Also, because the pamphlet that Penny was making was being mimeographed on an early Xerox, and he wanted to do a certain amount of copies. At that time, there was no money or access to print- ing, so it was like what’s the simplest, easiest way – apart from potato cut! – to reproduce, and a stencil was perfect for that.The other thing was the Union Jack. I remember being in junior school and they taught us how to draw the Union Jack, which is notoriously difficult to draw because of the way the crosses of the three kingdoms overlap, there’s an asymmetry to it. I wasn’t consciously thinking of the swastika though. The biggest single influence was the Japanese family crests.”

Steve Ignorant saw the symbol for the first time when it was suggested it would be taken up by Crass.“I thought it looked good – really smart. The only aspect I didn’t like was that there was something about it that looked like a swastika.” Steve recalls a more recent incident that illus- trates the ambiguity of the symbol:“I was standing at the bar and I was wearing my green bomber jacket. I had a little enamel Crass symbol and a barn owl just on top of that.There was a black guy standing at the bar and he kept looking over . . . of course, from a distance it looked like a German Gestapo symbol – you had this barn owl that looked a bit like an eagle and then the Crass symbol which looked a bit like a swastika – I soon took that off.”

Little could Dave King have known that the sign he designed for a home-published pamphlet with a print run of 100 would still be all around today. It is worn as a tattoo by punks, layabouts and young soul rebels everywhere.“I still see the symbol today in California, on a jacket or a tattoo,” says Dave. “I’m tempted to go up to them and say ‘do you know that I designed that?’ It’d be like,‘piss off granddad!’They would- n’t believe me anyway!”

And this was from the crass web site.

The logo represented an amalgamation of several “icons of authority” including the Christian Cross, the swastika and the Union Flag combined with a two headed snake consuming itself (to symbolise the idea that power will eventually destroy itself). Using such deliberately mixed messages was also part of Crass’ strategy of presenting themselves as a “barrage of contradictions”, which also included using loud, aggressive music to promote a pacifist message, and was in part a reference to their own Dadaist and performance art backgrounds.

Via Crass A History.

The more critical reason dominates, the more impoverished life becomes… Overvalued reason has this in common with political absolutism: under it’s dominion, the individual is pauperized.