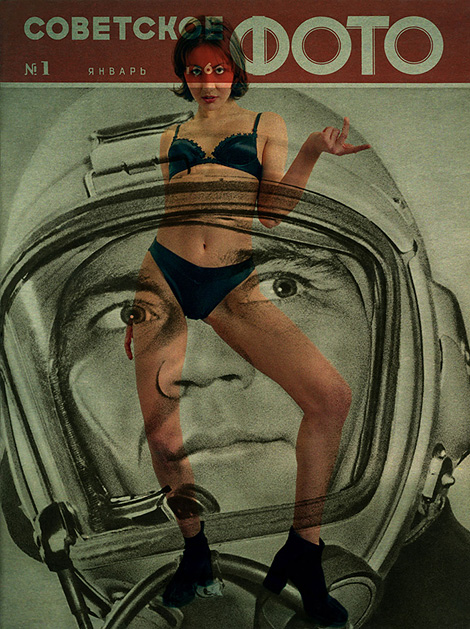 From 1926 through 1992, the only photography magazine available for both amateur and professional photographers in the Soviet Union was Soviet Photo. Because it was state-run, the images shown in the magazine were printed with the sole purpose of furthering Communist propaganda.

The artist Roman Pyatkovka worked as an underground photographer during part of that era, risking imprisonment for many of the images he took back in the 1970s and ’80s.

“It was a time when the police would view anyone with a camera as suspicious,” Pyatkovka wrote via email. “A time when any nude image was considered pornographic. My works were a breath of fresh air against the oppressive totalitarian state.”

Pyatkovka, along with a handful of other artists, wanted only to work without censorship creating work that was “dangerous, but at the same time exciting.”

Using both the propaganda imagery from Soviet Photo along with his own illicit imagery taken during the Soviet period, Pyatkovka has created a series of imagery titled “Soviet Photo,” which, he wrote, enables the viewer “to reflect on the ideals and disappointments, censorship and creativity of that time.”

All beings by nature are Buddha, as ice by nature is water. Apart from water there is no ice; apart from beings, no Buddha.