“Her clothes spread wide;
And, mermaid-like, awhile they bore her up:
Which time she chanted snatches of old tunes;
As one incapable of her own distress,
Or like a creature native and indued
Unto that element: but long it could not be
Till that her garments, heavy with their drink,
Pull’d the poor wretch from her melodious lay
To muddy death.”

Celebrated as one of the greatest actresses of all time, Sarah Bernhardt was also recognised for her talent in the medium of sculpture, a passion which complemented her success as a stage artist. The present marble relief of Ophelia is a rare surviving work signed by Bernhardt, and among her most important to appear at auction in recent memory.  Deeply sensuous in form and conception, Ophelia testifies to the iconic actor’s considerable skill as a sculptor, while epitomising Bernhardt’s fascination with the morbid eroticism that surrounds Shakespeare’s heroine.

Born in Paris to a courtesan and an unknown father, Sarah Bernhardt received her first training as an actor at the Comédie-Française from which she was expelled, prompting a brief period of activity as a courtesan. Resuming her acting career in 1866, Bernhardt began to develop a reputation on the stage at prestigious Parisian theatres. She soon found unprecedented fame across Europe and beyond, enjoying several worldwide tours during the 1880s and 1890s. Known in particular for her magisterial portrayals of tragic characters, Sarah Bernhardt’s legendary status continued into the early 20th century, when she starred in silent films and remained active on the stage until her death in 1923.

Sarah Bernhardt was as flamboyant a personality off the stage as she was in her dramatic roles. Famously, the actress acquired a coffin in the 1860s, in which she would pose and sleep regularly throughout her life. By thus fetishising her hypothetical corpse, Bernhardt displayed an erotically charged obsession with death that was both personal and symptomatic of her time – a time when morgues were places of public spectacle, and morbidly beautiful phenomena such as the death mask of ‘L’Inconnue de la Seine’ captivated the art scene.

It was the same 19th century environment which gave rise to an artistic fascination with the character of Ophelia in William Shakespeare’s Hamlet. The tragic fate of the heroine, who becomes Hamlet’s lover but falls victim to the Prince’s plotting of revenge and, in her eventual madness, drowns in a stream, was depicted by painters such as Eugène Delacroix and, notably, John Everett Millais.

Bernhardt’s activity as a sculptor began in the 1870s with guidance from Roland Mathieu-Meusnier and Jules Franceschi. Taking a studio in 1873, she went on to model a number of highly accomplished works, such as the group Après la Tempête, which she exhibited at the Salon in 1876.

Despite being the most famous actress of her day, Sarah Bernhardt had never performed the role of Ophelia at the time her marble was conceived – it was not until 1886 that she appeared as Ophelia in a production of Hamlet, followed by a controversial turn as the eponymous character of Shakespeare’s tragedy in 1899. Yet Bernhardt’s prominent obsession with death had led to a long-lived fascination with the tragic heroine, and her sculptural representation of Ophelia became one of her most significant works. Modelled in 1880, the relief accompanied Bernhardt on her first tour of North America before being shown at the Paris Salon in 1881. Reviews of Ophelia were positive, praising it as a work ‘of which any sculptor might be proud’ (see Mason, op. cit., p. 312) – a choice of words which highlights Bernhardt’s unique status as both a woman and a full-time actress active in the profession of sculpture. 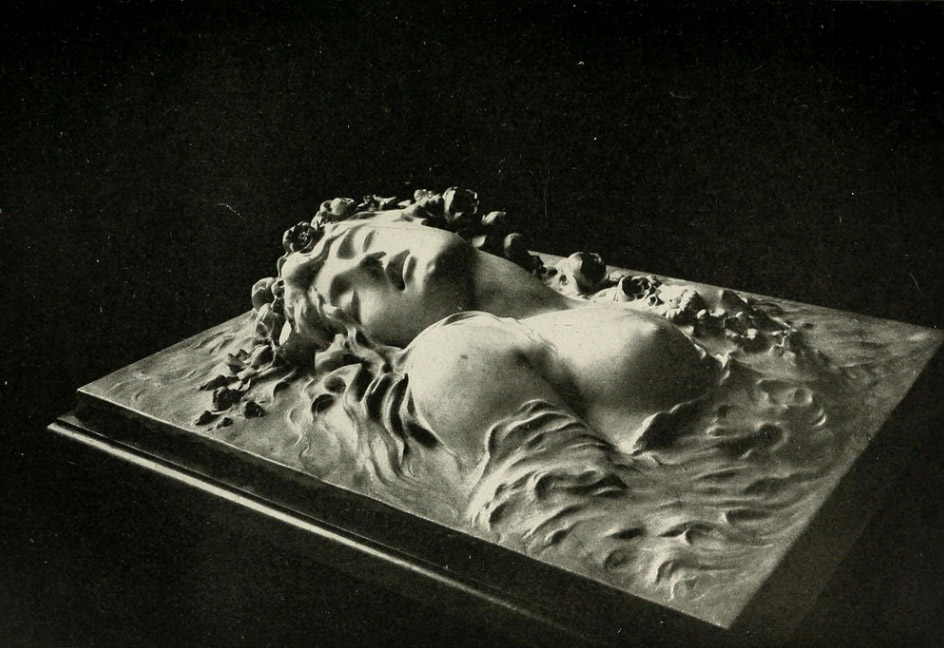 The relief is thought to exist in a handful of versions in marble, the present example being an important rediscovery. The only other version whose location is known is that in Copenhagen, which was gifted to the Royal Theatre by Bernhardt in June 1881 and remains on display in its foyer. Another version is recorded to have been a gift to the Austrian painter Hans Makart, while a third was exhibited at the World’s Columbian Exposition in Chicago in 1893. Photographs reveal very slight variations between the marbles, and it is possible that the present version is that which was given to Makart. Bernhardt’s personal attachment to the work is revealed by her inclusion of a photograph of Ophelia – probably the plaster – in her 1907 memoirs.

Bernhardt’s high relief represents Ophelia in bust-form, her head turned, her eyes closed, wearing a garland of flowers, and enveloped by water which merges with her tresses. The subtlety of Bernhardt’s modelling is showcased in the beautifully detailed flowers, as well as the delicate waves of the ‘glassy stream’, whose texture contrasts with the smooth and bulging form of Ophelia’s exposed right breast. Though seemingly depicted in the moment of her death, the woman’s sensuous open-mouthed expression, overt nudity, and languid pose exude an undeniable eroticism. Unaware of her suffering, the heroine appears to embrace her death as an ecstatic consummation. Bernhardt thus offers an original interpretation of the references to female sexuality and deflowering made by Shakespeare throughout the scene of Ophelia’s madness and Queen Gertrude’s speech describing her death, which makes use of sexualised imagery such as ‘long purples / That liberal shepherds give a grosser name’.

In her later theatrical interpretations of the character, Bernhardt would add a heightened level of eroticism to Ophelia’s death by choosing to appear on stage herself as the dead Ophelia – instead of the conventional coffin – in the graveyard scene, in which her brother Laertes throws himself upon her body. Mirroring her sculptural portrait of the heroine, Bernhardt was described thus in a review by Joseph Knight (1886, as quoted in Young, op. cit., p. 23): ‘She is once more seen with her face rigid as marble, and her body, covered with flowers, …’